5 Ways to Beat a DUI Charge

DUI charges may immerse a person into panic mode, especially if it’s their first ever experience. First time offenders have greater chances of being let off the hook, as long as their actions did not cause any serious damage to life and/or property. While all legal charges are intimidating, do not let a DUI arrest overwhelm you. It is imperative to realize that there is always a way out, or the possibility of facing minimized consequences.

Driving under the influence of alcohol or drugs is viewed as a social stigma, which is why onlookers may judge you harshly and form biased opinions. Nonetheless, DUI allegations are highly beatable with the right kind of defense and attitude. First-time offenders are normally unaware of the tactics or strategies that can overthrow the case. Therefore, it is important to maintain silence and let your lawyer handle the rest. California DUI Lawyer mentions five ways that frequently prove successful in beating a DUI charge:

1.     Determine that you were stopped illegally

The traffic police can only order you to pull over under a valid suspicion or for a particular reason. In most cases, the cop asks drivers to stop if they are violating one or more traffic rules; these include speeding, running a red light, weaving through traffic lanes, driving recklessly, driving too slow, or failing to signal (using indicator lights, headlights, horn etc.). If you were abiding by all legal and ethical rules of driving when the officer stopped you, the court shall deem the charges illegal and dismiss your case.

2.     Point out that you were deprived of Miranda Rights

In accordance with the Fourth Amendment to the U.S Constitution, police officers are required to recite you your Miranda Rights at the time of arrest. Many first-time offenders do not know that they have a right to remain silent and demand an attorney, or that anything they say can be used against them. If the police proceeded to cross-question you and bully you into giving a confession, you are entitled to file a complaint against such illicit behavior. When the police fail to Mirandize, every piece of evidence collected against you becomes invalid.

If the police arrested you on the basis of mere suspicion and possesses no solid proof to incriminate you, challenging the allegations is a viable option. Certain symptoms stated in the police report could be the result of an underlying health condition, rather than the consumption of alcohol or some illegal substance/drug. When you plead ‘not guilty’ and the prosecutor has insufficient evidence to request a trial, the charges are automatically revoked.

4.     Question the Reliability of Sobriety Tests

Field sobriety tests are usually unreliable for establishing DUI/DWI crimes. The driver’s poor performance in field sobriety tests is often associated with anxiety, confusion, some medical condition, or a health issue, such as obesity. Similarly, the use of a Breathalyzer to measure alcohol concentration in the bloodstream is largely inaccurate. The instruments may lack proper calibration or malfunction due to lack of maintenance.

Test results from a Breathalyzer can be misleading. The alcohol content in your mouth is not a true representative of its quantity in your bloodstream. Elevated levels in your breath could be caused by the usage of some alcohol based oral product, like a mouth freshener. Chemical testing is the only dependable technique to determine actual BAC levels in the driver’s bloodstream. Blood tests are considered the most reliable method, whereas urine tests are uncommon and not very precise. Sometimes blood test results can be deceptive as well; for instance, when the driver’s blood sample was not immediately tested in the laboratory, or it was stored improperly.

What is the TASC Drug Diversion Program in Arizona?

TASC is an abbreviation for Treatment Assessment Screening Center. It’s a not-for-profit deferred prosecution program available to certain drug offenders in Arizona. The program is based on the belief that rehabilitation should be available to certain drug offenders instead of incarceration and other criminal penalties. If a person is arrested for a drug offense and is eligible for TASC, successful completion of the program results in the drug charges against them being permanently dismissed.

A person seeking a TASC deferred prosecution must do so prior to entry of a guilty plea or commencement of a trial. They can’t have any convictions for dangerous or serious offenses or dangerous crimes against children. They also cannot have been convicted of personal possession of a controlled substance or drug paraphernalia more than three times. Other factors are also weighed in consideration of entry into the program, like having the ability to pay for it. All fees charged by TASC must be fully paid to earn the dismissal.

If the defendant, prosecution and judge agree to TASC, completion of a program lasting up to one year is required, depending on the agreement. Treatment consists of drug and alcohol education while being subject to random drug testing.

TASC does not allow a person participating in the program to consume any drugs or alcohol. When notified that it’s time for a drug test, the person in the program must report to TASC by the end of the business day to provide a urine sample. If compliant, the person remains in the program. If any drugs or alcohol are found in the urine sample, the prosecution and court are notified, and the drug charges will be reinstated. The person is then exposed to the full range of penalties, including a jail or prison sentence.

TASC helps both the person charged with a drug offense and the criminal justice system. Upon successful completion of the program, the participant gains a permanent dismissal of the drug charge, while the time of prosecutors and judges is freed up for keeping us safe from the really bad people out there. Participants leave with the life skills that they need to avoid becoming repeat offenders, and the state saves valuable taxpayer dollars.

If you’ve been charged with a drug offense in Arizona, you’ll want to inquire into TASC for deferred prosecution of your case. It benefits everybody. For a free case review, give our office a call to schedule an appointment. We can be reached 24 hours a day by calling (602) 737-2812 or by using our confidential email form.

If I mention the name Bernie Madoff, what words come to mind?  Probably thief, criminal, felon and crook are on the short list.  For most people the name Madoff is synonymous with the words “Ponzi scheme”.  A Ponzi scheme, named after one of the first mass defrauders Charles Ponzi, is a fraudulent investment operation where returns on someone’s investment are paid by other investors rather than by a real or genuine profit sharing scheme.

Ponzi schemes can get pretty intricate but to put the crime in simpler terms, Ponzi schemes are complex forms of theft or embezzlement.  So what’s the difference between theft and embezzlement?  Embezzlement is a white collar crime, with the person usually stealing from his employer or other investors.  Embezzlement is misappropriation of monies that you are entrusted with.

For many years the legal system was pretty lenient on white collar crimes such as embezzlement and money laundering, however with the major impact that criminals like Bernie Madoff have had on the economy and thousands of individuals, these crimes are punished more severely today.  Listed below are five of the most famous embezzlement cases in the US and the prison sentences that were served. 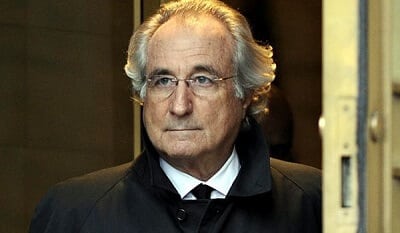 Madoff was arrested in 2008 and the word Ponzi became widespread throughout America.  Mr. Madoff was an investment advisor that was found guilty of 11 federal counts of fraud, including securities fraud, investment advisor fraud, false filings and money laundering.   Madoff’s Ponzi scheme bilked thousands of investors of an estimated amount of $65 billion.  In June 2009, Madoff was sentenced to 150+ years in prison. As of March 2014, approximately $5.87 billion has been distributed among the victims of Madoff’s Ponzi scheme. 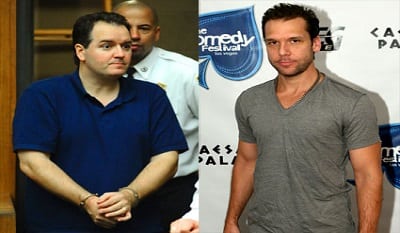 McCauley’s name might not ring a bell but he is the half-brother of famous comedian Dane Cook.  Darryl McCauley was also the comedian’s business manager and used his position as both a family member and business man to steal millions of dollars from the star.  McCauley plead guilty to 27 counts including larceny, forgery and embezzlement and faces 5-6 years in state prison with 10 years of probation and must make restitution to Dane Cook. 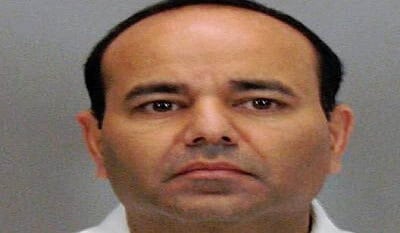 In 2008, Omar Siddiqui was the vice president of operations and merchandising for the electronic retailer Fry’s Electronics.  Siddiqui set up a dummy company that received illegal kickbacks totaling over $80 million dollars.  Siddiqui continued embezzling money to pay off heavy gambling debts to several casinos.  Siddiqui was sentenced to 6 years in federal prison and has been ordered to pay $65 million dollars in restitution. 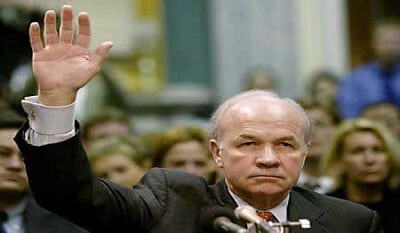 Lay was the founder, CEO and chairman of Enron and is infamously known for his role in corporate abuse and accounting fraud with the company which cost shareholders nearly $11 billion dollars.  Enron became one of the largest sellers of natural gas, however years of unethical accounting practices resulted in the company filing for bankruptcy.  Kenneth Lay was facing up to 45 years in prison plus monetary fines, however he died before sentencing. 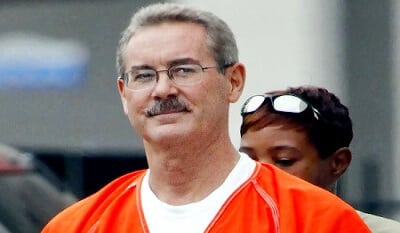 Once a prominent financier and professional sports sponsor, Stanford was the owner and CEO of the Stanford Financial Group of Companies.  The SEC launched an investigation in early 2009 to find that a massive ongoing fraud involving over a $8 billion dollar Ponzi scheme.  Allen Stanford was charged by the SEC and ultimately convicted of fraud and numerous violation of US securities law.  Stanford is currently serving a 110 year prison sentence.

This post was provided by: – Adam H. Rosenblum of The Rosenblum Law Firm is an embezzlement attorney practicing in both New York and New Jersey.